How the Internet Works

History of HTML and CSS

How the Internet works

How the Internet Works

History of HTML and CSS

Intro to the Web

How the Internet works and how to build a website.

Ask yourself and answer these questions:

What is a web browser?
Web browsers let you go onto the internet.
Safari, Google Chrome, Internet Explorer and Firefox are all web browsers.

What is a web page?
Web pages are files stored on computers, that are connected to the internet. Web pages are the pages full of words, pictures, videos, interactions and links to other webpages.

What does HTML do?
HTML formats (arranges the layout of) webpages.

How do you make a web page?

A program called a text editor, or code editor, allows you to write your code or mark up and save the file as a .html file.
A browser can open html files. Some common text editors are Notepad++ for PC, TextEdit for Mac and Adobe Dreamweaver.
We will use the Code Avenger’s text editor in every lesson. You can make your own webpages in our I.D.E →

There are many tools for easily creating websites without knowing HTML and CSS, so why should we learn to code?
Website builders are great if you are building a site that is similar to many other existing sites. But if you want to build something new and of high value, you need to know how to code.

A URL (universal resource locator) is an address that identifies the location of a web page, image or other file on the Internet.
E.g. http://www.google.com is the URL for the Google search engine.
We can break a URL into 3 parts:
protocol://server/path
https://www.codeavengers.com/html-css/1#4.4 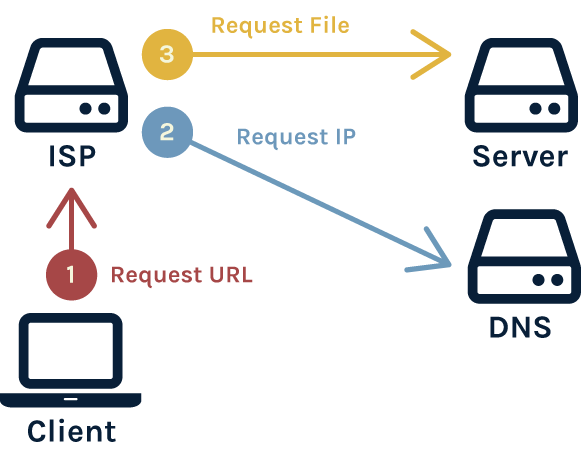 Note: The DNS is the domain name system, or the name of the website. So what happens in the diagram? Be prepared to learn some acronyms! The videos above cover similar content, so watch them as well.

Firstly, your computer sends a message to your internet service provider, ISP, to request it retrieves the webpage you are looking for. {code}

Tech target → has an article, posted by Margaret Rouse, that explains HTTP in more depth.

Once the ISP recognises that you want files sent using the hypertext protocol it accesses a DNS, the domain name system.

There are two addresses for a server computer.
There is the domain name, like "Google", "Code Avengers" or "Facebook" that is easy for humans to remember and there is an IP address. @IP address

So you need this number to access the files you want (the website) but you can't be expected to know 2001:db8:0:1324:0:567:8:1 (IPv6), so you type in a domain name, your internet service provider asks a DNS where that actually is, the DNS sends back an IP address.
Then the ISP goes "Awesome, 2001:db8:0:1324:0:567:8:1 send me your file on racecars, it is in your car folder in your content folder" then the server sends the ISP the file, your ISP sends the information to you (the client) with the URL saying "Wikipedia sent this information".

There is a lot happening and it happens really fast!
Oh, also the servers you are accessing probably far are across the ocean. Isn't technology so amazing?

1.2: How the Internet Works

The router quiz covers your learning of this video: Intro - part 2 How the internet sends info

You can see the results of the lessons and quizzes for your whole class with the [/admin|admin]] page accessible by the [[/profile#teachers|student dashboard.

Here is some information on how to make your own website.

Things to consider when choosing a name

A domain name is a URL people can type into their browser to get to your website.

.com if you are going to be global. Local if it is for local only, e.g. trademe.co.nz

Choose a t.l.d ending. Tld identifies the most general part of the domain name in an Internet address and follows the last dot in a URL.

.org for a non-profit organisation

2. Check if a domain is available:

Use a website that sells domain names, like GoDaddy. Search for the domain name that you want

You will get the following responses:

As part of planning your website you will have to decide:

This requires you to work on one page at a time using your knowledge of:

A web host is a business who provides storage space for a website and all its web pages. You want to get it online so others can view it, so the first thing you will want to do is find a hosting provider. Web hosting can cost from nothing to millions of dollars depending on how much your site is used.

Get the pages you have designed up to the hosting provider you have chosen, through either the tools their service provides or with FTP (File Transfer Protocol) clients.

One way to promote your website is through website advertisements, but that can be very expensive. An inexpensive way of promoting your site is through search engine optimization or SEO. SEO is the process of affecting the visibility of your website or page in a search engine's results. This can be affected by how you build your web content. Things to consider:

Tools like Google Analytics → are used to monitor the statistics of a website traffic and traffic sources.

To keep your site going well and looking good, you need to continue testing and maintaining it even after it has been live for a while, because with new devices coming on the market and upgrades to browsers, your website may be affected. You should also continue working on content development of your site because the more content you provide the more visitors you will get.

A web browser is what you use to connect to the Internet. A good website will work across all browsers but you will have a preferred one to use while you are making, testing and updating your website.
Choose a modern web browser that has good development tools to help make building web pages easier.

A text, or code editor is a program that you can open up web files in and edit the content and formatting of the webpage by adding code. Your view will be of a bunch of text on a page that is then transformed into a webpage.

There are hundreds of good text editors out there.

For this course we'll be using codeavengers.com. It is an online text editor that allows you to see results as you type HTML and CSS. Below is an image of our I.D.E where you can make your own projects. 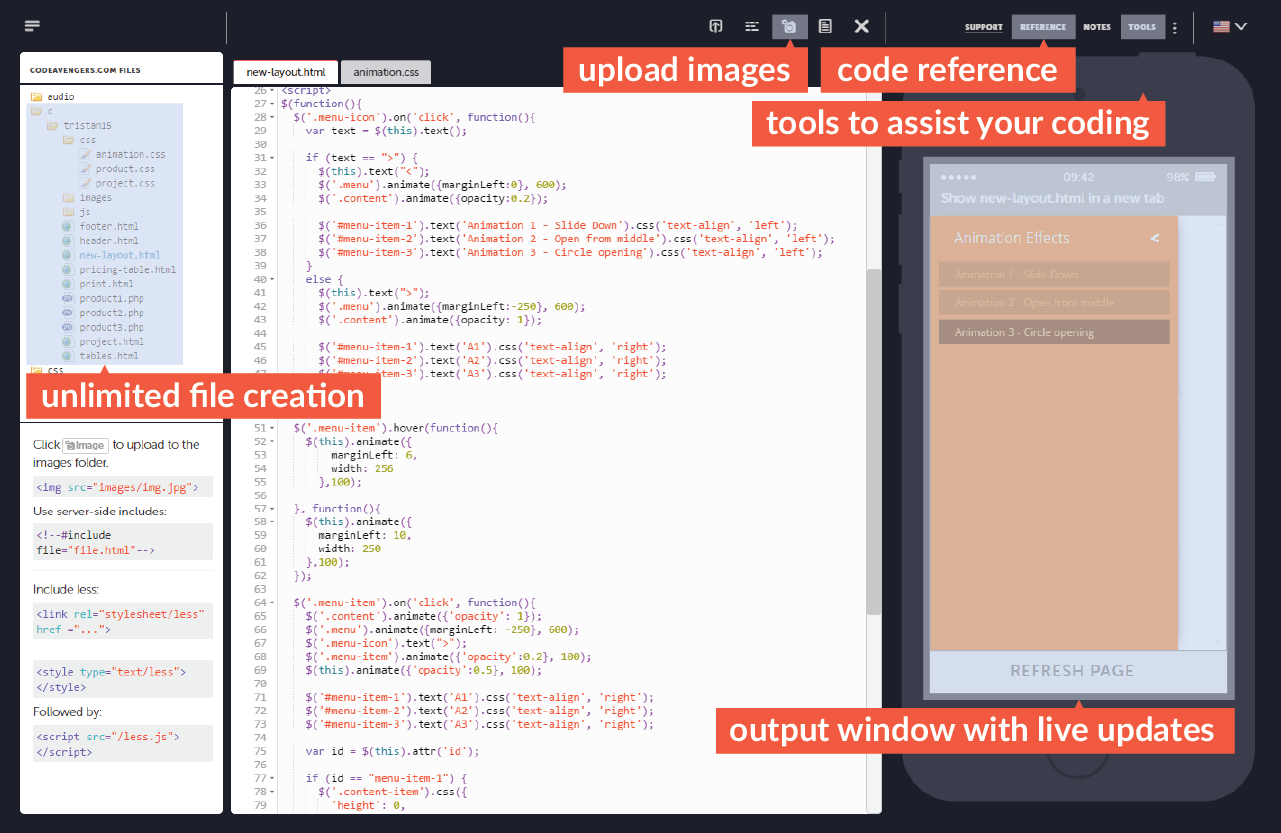 "It's surprisingly easy to create a unique website, blog or online store'" - weebly

Use Shopify to create your online store

WordPress is free web software you can use to create a beautiful website or blog.

Cloud 9 combines an online code editor with a full Ubuntu workspace in the cloud. It provides a live preview which enables you to interactively see what your web application looks like! 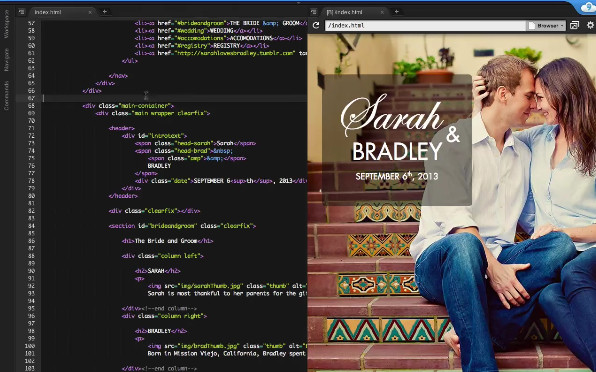 With focused visual tools and pre-processor support, Brackets is a modern text editor that makes it easy to design in the browser.

Use contextual code hinting to easily define fonts, colors, and gradients in your CSS, and drag and drop web-optimized images into your designs.

HTML 2.0: published in 1995 as the first official HTML standard

HTML 4.0: published in December 1997; deprecated many HTML tags and attributes (such as font and center) that were used to style web pages, in favor of CSS.

XHTML: is a more restrictive form of HTML that conforms to the XML standard and was first published in 2000.

Development the HTML5 spec began in 2004 and was published as a working draft in January 2008. A final call for revisions to the standard was announced in May 2011. The W3C is aiming to publish complete spec in 2014.

HTML5 also incorporates new application programming interfaces (APIs) that can be used with JavaScript, such as:

There are also several APIs being developed by W3C that are not part of the official specs:

The CSS3 extends CSS2 and adds new functionality. The specification is divide into separate documents known as modules. The earliest CSS3 drafts were published in June 1999. CSS3 currently has over 50 modules, which are at different levels of stability and status. 4 of these have been published as formal recommendations:

Some of the features new to CSS include:

Check out this site for some really cool examples of what is possible with some more complex CSS3: http://simurai.com/tagged/lab